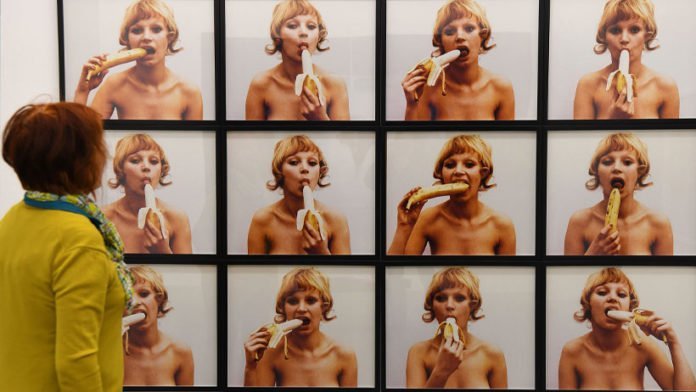 The censorship wave is still sweeping the globe. The National Museum in Poland has removed a 1975 video artwork from its exhibition. Natalia Lach-Lachowicz’s work provocatively featured several women eating a banana.

After the adoption of the copyright reform in the European Parliament and the mandatory age verification in Great Britain, it seems clear that sexual freedom, eroticism in the mainstream and pornography of all kinds are under attack in the European Union as well. Even in art, things are obviously becoming more prudish and invasive.

Under the direction of Jerzy Miziolek, the Polish National Museum has decided to remove Consumer Art, a video installation by artist Natalia Lach-Lachowicz, from the museum’s permanent exhibition. According to Miziolek, it holds the potential to irritate young, sensitive people.

Banana Eating for Freedom of Art and Sexuality

Poland on its way to banana dictatorship?

The museum thus joins an international wave of censorship and also has to accept the embarrassing comparison with the Chinese state’s desire for total surveillance. In China, it is forbidden to publish videos of women eating bananas on the internet.

The artist Natalia LL, born in 1937, has apparently not yet made a statement about the ridiculous and embarrassing decisions. Nevertheless, protest swelled up, first on the web, then on the streets. Many now publish pictures and videos of their own banana eating on their social media accounts.

Polish artist Sylwia Kowalczyk published a biting reply on Instagram and calls for collective banana protest. In doing so, she massively attacks the museum and calls the procedure by its name: Censorship.

Z cyklu prac pt. ‘Szlag mnie zaraz trafi’ dzisiaj tribute dla Natalii Lach Lachowicz. Jak wiemy #bananwrogiemnarodu wiec jesli widzicie tutaj cos innego niz calkowicie ubrana kobiete spozywajaca owoc tropikalny to prosze pisac na adres MK a nie komentowac pod tym postem. From the cycle ‘Damn right I will’ that I’m starting as of today I present my tribute to Natalia LL who’s iconic work was taken down from the permanent collection of 20th and 21st century Polish art as apparently too controversial for public display. We are entering a new era of censorship by this ultra catholic rightwing Polish government which lets the Catholic Church to be in charge of sexual education and brainwashing of a young generation, who thinks gayness can be ‘cured’ and LGBT community, feminism and something they call ‘gender’ are pure (d)evil. I have never thought I would get into political debate with my art but maybe it is the time to take the lace gloves off. Watch this space. #bananowyprotest #bananagate #censorship #cenzura #sztukabezcenzury #muzeumnarodowe

In an interview with CNN, Kowalczyk says: »This should not happen to any artist, male or female. Natalia Lach-Lachowicz is one of the icons of the Polish contemporary art and has her place in art history already.«

The photographer Justyna Piechuta joins the protest. She says: »For me, Natalia’s works are a view on feminism, however, the banana that was used in the image is also a symbol of freedom. I can’t imagine in today’s world someone would try to ban art just because of their views on art or sexuality.«

Criticism is emerging even on Polish television.

Under the slogan Bananowyprotest, numerous photos and videos of public resistance to the museum’s decision can be found on Twitter and Instagram. There have also been protests in front of the Warsaw Museum itself. Several demonstrators gathered for a live banana dinner in front of the building.

Museum director Miziolek thus came under pressure and vehemently denied having yielded to external pressure. Now he seems to give in for the time being. The installation will return for a week, but then there will be renovation work. It remains to be seen whether the work of art will also remain present after the renovation or whether Miziolek will try to make it disappear after the reopening. An embarrassing act against the freedom of art – in the middle of Europe.

You can find the complete film here.