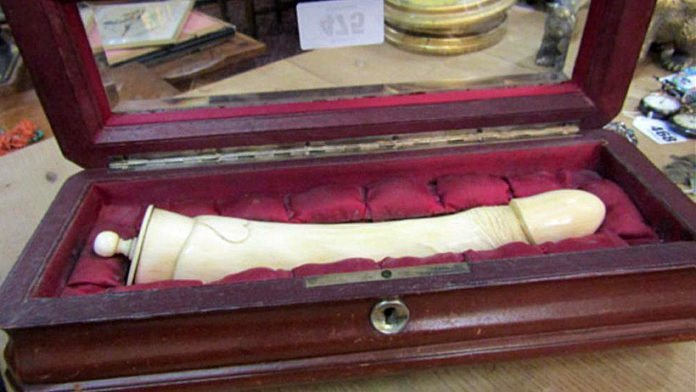 A wealthy Irishman had brought a sex toy with him from a trip to India as a present for his wife. The auction house stated in 2017 that the original owner might even have killed the elephant himself, knowing that he had taken part in elephant hunts at the time.

»A family member found it in a drawer, and he put it in the auction for fun really,« auctioneer Damien Matthews told the Irish Times. »We believe the ivory dates back to the 1840s. This fellow, the original owner, was in India in the 1840s, where he shot himself an elephant and brought the tusk home.«

She appealed to the Irish national identity. In an interview with the Irish Times Scott said: »It made my heart sink when it was sold. It just seemed like such an important part of Irish sexual history. Sometimes I think with Irish history unless something is tied to the famine or 1916 it gets a little forgotten or re-prioritized.«

Her own budget was not sufficient to purchase the valuable collector’s item two years ago or now. So she tried to make the power of the crowd work for Irish sex history. A few hours before the auction started, she went on Twitter to raise money.