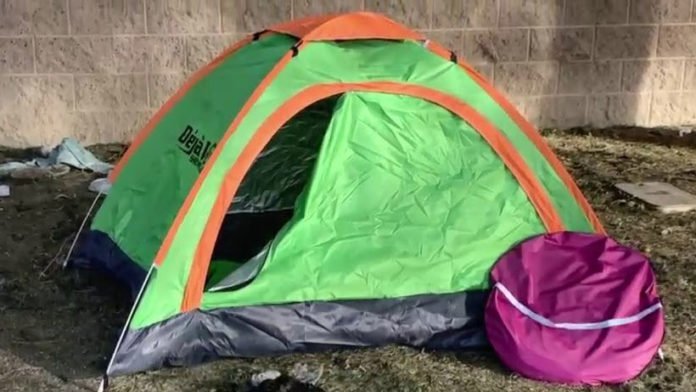 A concerned, religiously motivated mother is currently trying to stop a strip club in Las Vegas from distributing tents with the club’s logo to homeless people. A good example of how, in one of the richest countries in the world, harmless eroticism is often considered more perverse than massive poverty. A more than questionable interpretation of Christianity.

But Déjà Vu is also socially committed and tries to help homeless people through the most difficult months of the year with small tents distributed free of charge. The logo of the strip club chain is on the tents, and one can certainly doubt the selflessness of a charitable action if it involves the display of a company logo.

But on the other hand, they are really helping those in immediate need; to have at least tent fabric over your head in winter and to find at least a tiny retreat, probably completely outweighs the fact that the company also combines advertising purposes with the action. Déjà Vu has spent 50,000 dollars on the production and distribution of tents for the homeless.

This apparently did not stop a religiously-motivated mother from Las Vegas from complaining about the tents with the strip club logo. The omnipresence of the company name now forces the mother of two to explain to her children what Déjà Vu is.

Megan Schwartz is a spokesperson for the company. She says about the process: »I think it’s pretty unfortunate that the city passed that ban against camping which doesn’t go into effect until February of 2020, and we’re always trying to do our part to help whenever we can.«

The local US news channel KNTV reported: »The viewer, who wishes to remain anonymous, told 13 Action News that she was driving with her small children on Bonanza Road near the downtown area when her child saw the tents and asked about Deja Vu. The mother says that she was ‘taken back’ and described the company in unflattering terms such as ‘immoral’ and ‘disgusting.’«

Fortunately, Déjà Vu doesn’t put up with such outrageous misanthropy. The club announced: »It was recently brought to our attention (now by multiple outlets) that some community members are upset by the fact that the homeless population in Las Vegas have clothing and tents that bear our logo. It is 100% true that we provide warm clothing and sleeping tents for the less fortunate. This just seems like the right thing to do during the holidays. While some seem to think that the solution is a camping ban, we think that the solution is one that includes decency and kindness. We hope that others can show some humanity and do their share to take care of the neediest among us.«

The strip chain addresses the public with a confident message: »We’re living in Las Vegas; there’s billboards, there’s clubs. This is an all-inclusive city where you’re going to see all this stuff. Remove the tents and you’re going to see somebody sleeping in a pair of shorts, barefoot but on cement, and I don’t necessarily want my children seeing that either because it’s sort of sad.«